Polymath artist Bruno Bressolin, who lives and works in Paris, often begins a project by making notes on disasters reported on the morning radio news. He began "SANG D'ENCRE" (which, in English, means "worried sick") following reports on Hurricane Sandy; a year later he had created over 400 large ink drawings which first took shape as a book, then were assembled onto a wall of images 7 wide and 5 high and presented in Paris.

He recently completed a series of color ink drawings titled "UNE ANNÉE SANS ÉTÉ", which refers to the year 1816, during which severe climate abnormalities caused a cooling trend that brought global drought, famine, and agricultural distress. In its book form, "UNE ANNÉE SANS ÉTÉ" (A Year Without Summer) presents a continuous progression of everyday activities combined with natural, manmade, social, political, and personal disasters. As teens surf coastal waves, forest fires engulf a stand of trees; a cougar howls; an earthquake takes out a multi-story apartment building; groups of people run; a bridge crashes into a river; men in masks hover at a corner; shadowy actions take place. Further into the book, the ink drawings turn to color; scientists collect specimens in a river; the river scene transitions to a view of space, then back to land, a forest, a highway wreck, an underground hideout from which a girl is rescued.

The abstract qualities of Bressolin's drawing lends an unbearable sense of foreboding. Further ahead images of votive figures come to life in a group of images that suggest the despoilation of land and the destruction of native cultures. But the collection is not without Bressolin's trenchant sense of humor. On one spread, a child's tree house casts misdirected meaning onto the scene of a car wreck opposite; at the end, a photograph of the artist's drawing table suggests that much blood is spilled in the making of art. 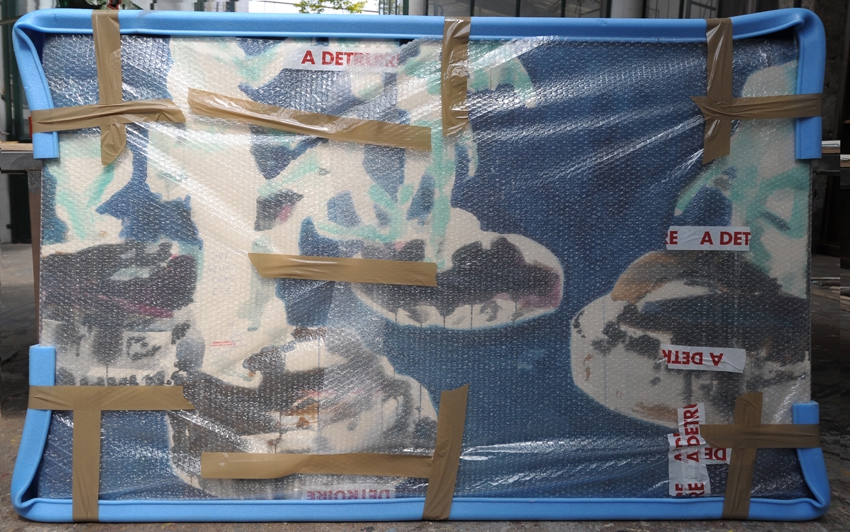